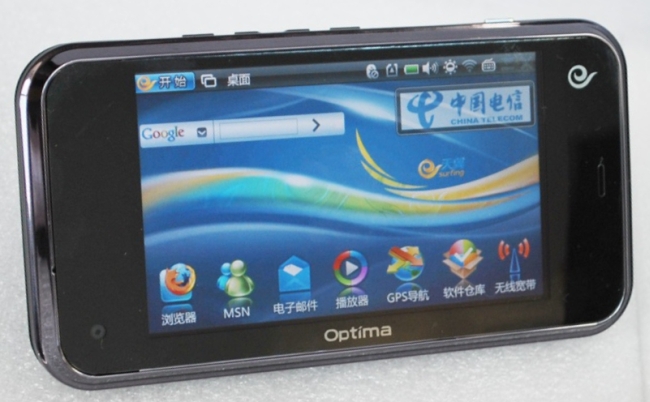 Maemo is Nokia’s open source operating system built on top of the Linux kernel. There have been only three Maemo devices thus far: the 770, N800 and N810. Today the fourth one has been announced by a little known Chinese company called Optima. The OP5-E has a 4.3 inch 800 x 480 resolution screen, 806 MHz Marvell PXA320 CPU, is 143 mm x 74 mm x 17.6 mm and weighs 300 grams, has a 3.2 megapixel camera, built in EVDO that supports China Unicom’s network, WiFi, GPS, Bluetooth 2.0 and a whopping 2600 mAh battery. The first version of the software, which is probably built on Maemo 4.1.2, to ship on the OP5-E will only support data via the built-in EVDO. An upgrade is planned to support phone calls and text messaging, and that will probably be built on Maemo 5. No word on when this little guy will ship, or how much it will cost, but the Maemo team in Helsinki must be jumping up and down right now that this is not using Android.

Some thoughts on the next Nokia Internet tablet device

It's fair to guess Nokia will launch a new Internet tablet device later this year. We've already posted an article...