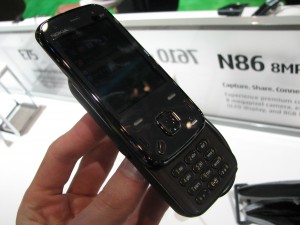 The Nokia N86 had already been announced for the U.S., but an update on their bulletin board has dropped the pricetag: $558.00, unlocked from their flagship store. For those who didn’t catch the MWC launch, the N86 rocks the same two-way slide of its N85 predecessor (standard T9 keys out one end, media functions from the top end), and packs Nokia’s first 8 megapixel camera, which places it squarely against Sony Ericsson’s C905, the LG Renoir and Samsung Memoir, all of which have a significant head start. The N97 didn’t exactly make a splash among the bloggers (even though the sales numbers were decent), however the N86 will probably fare better – a solid camera and a familiar form factor will go a long way, especially once carriers pick it up and subsidize the beefy price point. Look for the N86 in flagship stores in “the coming weeks”.