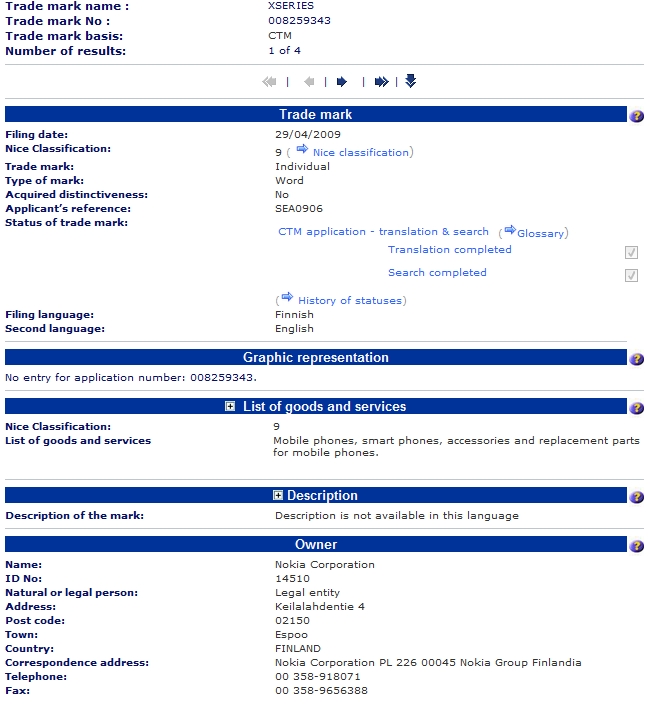 Yesterday I told you guys about Nokia’s new Cseries lineup that was revealed via a Finnish trademark registration site. Aleksi Moisio from Finnish news site Digitoday discovered a new lineup of devices called Xseries on OAMI’s (The Office of Harmonization for the Internal Market) website. I could stop here and that alone would be enough for a blog post, but since it is Sunday and I have nothing better to do, I decided to poke around OAMI, and Finnish website Prh, to see what other trademarks I could find. I hit the proverbial jackpot. Just a reminder: Companies trademark words and model numbers all the time, but it does not mean they are going to use them. Nokia, last time I checked, never created a device with the number 4 in the model name. It’s also strange to see a large number of Eseries trademarked, yet few Nseries, and zero of regular (i.e. 6300, 1200, etc.) devices.

Nokia Money: Trademark was filed on July 16, 2009. Description: “Computer software to enable mobile telephones to transfer money from one bank account to another bank account.” And: “Financial transaction services, namely, providing secure commercial transactions and payment options using a mobile device at a point of sale.” Is Nokia trying to become the next VISA?

Nokia to introduce a new Cseries lineup of devices?

We're all familiar with Nokia's Nseries, which arguably are the best devices on the market if you're into recording video...