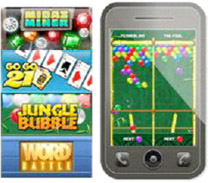 Another King.com news. Just few days ago the online skill games company announced the release of 20 JavaME games for feature phones. Among the titles that have been released are such popular games as Midas Miner, GoGo21, Jungle Bubble and Word Battle — all of which are free to play, and King.com will even deposit $5 for free in every new account (which can be used to participate in cash tournaments).

King.com’s mobile games are available through a custom app that can be downloaded at www.king.com/mobile. From there, you can grab all 20 titles and more games are planed to be added every month.

Commenting on the release, King.com’s CEO Riccardo Zacconi said: “King.com’s games are now available to hundreds of millions of consumers to play wherever they are. Through the device that never leaves you, King.com now puts skill games directly into the hands of even more consumers worldwide.”

Warner Bros has teamed up with Guinness World Records for a neat marketing plot. Their idea is to promote the...