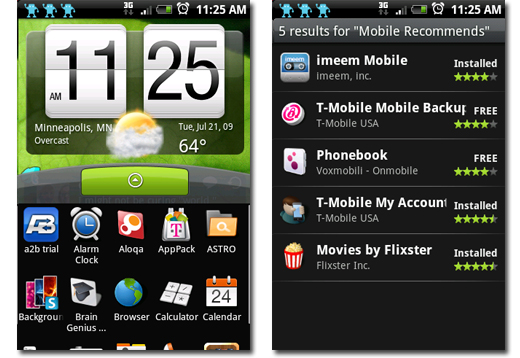 T-Mobile has the wheels turning and are no doubt working hard on the myTouch 3G. In fact, one thing new myTouch 3G owners will have to look forward to is the constant promotion of apps via T-Mobile, something Android users on other carriers might not experience. Case in point, the new T-Mobile ‘AppPack’ for the myTouch 3G has already leaked out. Included in this package are the following titles:

The AppPack is essentially an Android Market filter that allows access to the above mentioned apps only. Look for this package to become official as soon as the myTouch 3G becomes available for general consumption.

To grab the AppPack, hit up http://www.tmoapps.com/Documents/AppPack.apk from your device. (hopefully the link still works by the time you’re clicking on it!).

[Via: AndroidGuys and AndroidCentral]

AdMob, which is an ad network used on over mobile 7,000 websites and over 2,500 applications, serves over 7 billion...