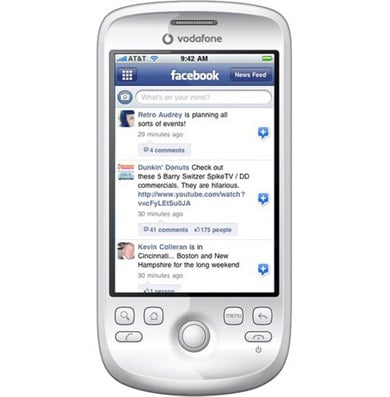 Here’s a cool one for the Android users (Android-ians?) out there. Most will of course know that Facebook for Android has been absent for what seems like wayyyyy too long. The relationship between Google and Facebook has been turbulent at best, and most have pegged the delay of this app due to these rocky relations. Thankfully, that all could be coming to an end soon, according to the latest rumor posted by TechCrunch. They put a Facebook app for Android up and available as early as the end of this week! Not much else is known just yet, other than the app will launch with a limited feature set. The app will be geared to focus on the Facebook news ‘stream’, which should work brilliantly on Android for sure.

Stay tuned for more. Hopefully the rumors are true and we can load up Facebook on our Android devices… enabling us to waste hours upon hours of each and every day. 🙂

VOXOFON brings its VoIP app to the Palm Pre

Houston, Texas-based VOXOFON is all proud to announce that they are the first VoIP application on the Palm Pre. Set...