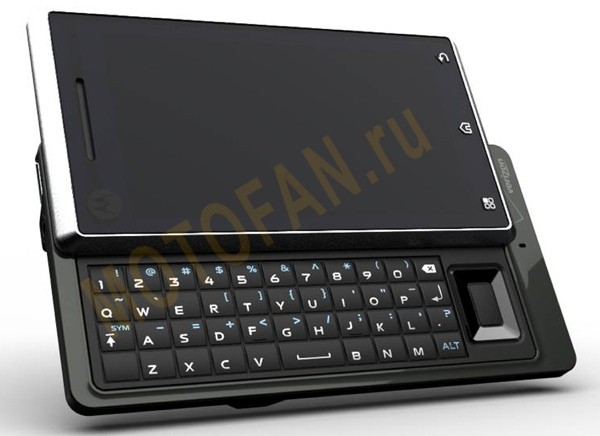 Verizon Wireless has yet to bring a serious Android smartphone into its mobile phone portfolio, but that may soon change. A new set of handset renders have surfaced today that show an Android-powered Motorola smartphone bearing some Verizon branding. The newly leaked pics  of the Motorola “Sholes” could be the first images of an Android smartphone that could very well become the first of its kind for both Moto and Big Red.

This is what we know, the Motorola “Sholes” will may be one of the first Motorola Android smartphones, and should come packing a 3.7-inch (480×854) touchscreen (presumably capacitance-based), 5-megapixel autofocus camera, GPS, Bluetooth 2.0, WiFi, 256MB RAM/512MB ROM and a microSDHC slot capable of supporting cards up to 16GB in size. The feature-set alone is certainly nothing to scoff at. Add to it the striking industrial design and slide-out QWERTY keyboard, and the Moto “Sholes” sounds like a can’t miss smartphone.

Motorola’s primary weakness has always been the mobile phone UI. Because Motorola made such a big splash with the RAZR’s bold design, the company concentrated more on style than substance. To Moto’s credit, their handsets are usually easy on the eyes, if not downright impressive. By letting the Android OS make up for the company’s weakness in UI development, Motorola’s “Sholes” (as well as the Motorola Morrison) could bring it out of its rut. Especially in light of the fact that Motorola posted a modest profit for Q2 2009!

It’s been a long time coming. Let’s hope it was worth the wait.

Following too many quarters of red ink-stained balance sheets, Motorola has today posted a profit. Motorola's Q2 2009 saw a...