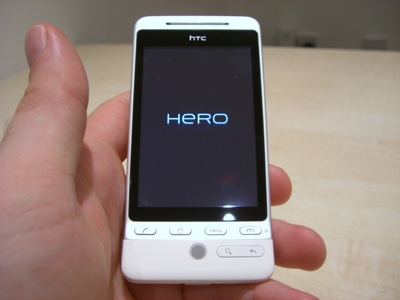 Last week was a crazy week – here at IntoMobile Towers UK, I had not one, not two, but three of the current crop of touch-based smartphones on my desk! I took some time to film some HD videos of all of them (the HTC Hero, Apple iPhone 3GS, and Toshiba TG01), but for right now I’m going to focus on writing some words about one of them – HTC’s newest kid on the block, and an Android-powered one at that – Ladies and Gents, I give you the Hero!

I’m sure most of you are now very familiar with Hero, mainly because of it’s aforementioned Android O/S – but there’s a lot more to it than that – both from a UI perspective, but also as regards the device itself. All the detail comes after the jump, but if you don’t have the time, or can’t be bothered, let me summarise for you here:

(By the way, I’m calling this a ‘lite’ review because I’ve not had that long with the device, and I feel a full review warrants at least a month or so to get to know both the Android modus operandi, and the hardware it is encased in, a lot better)

So let’s get stuck in and take a tour round the Hero…. 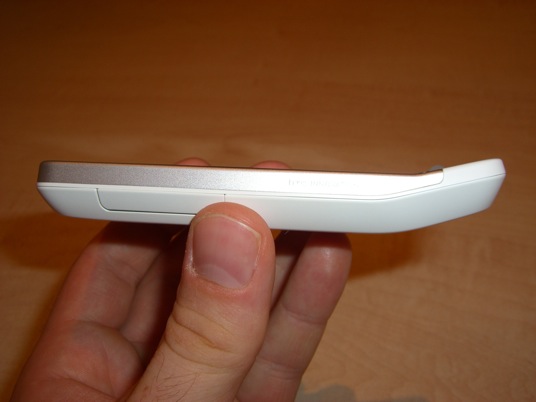 Look at my chinny chin chin!

Overall, the Hero hardware is good – it feels a decent weight in the hand, and the materials used seem to be good quality. The CHIN on the device (yes, I’m calling it a chin!) might potentially unsettle a few, but it actually means you sit the device up in the hand, and is good for using the buttons. Ah yes, the buttons, that’s another thing…

I can’t help feeling there are too many – including the clickable trackball (which seems to have been borrowed from RIM by the way – which is no bad thing), there are seven buttons at the base of the screen – and it’s been shown you can get away with less on a number of other devices. They aren’t that tactile, but, they do all have a function. I’m a fan of minimalism, so this was just a very slight downer for me, since I’m more than happy controlling context-sensitive buttons that appear on screen.

Another slight downer is the inclusion of the proprietary USB connector on the bottom of the device – that is a real shame in the days that we are rapidly transitioning to mini/micro-USB as a bit of a standard on smartphones (excluding a certain manufacturer!). However, on the assumption that you upgrade your device every 12-18 months or so, it’s not a showstopper – and the next HTC device you go for (if you stay loyal) will almost certainly be sporting  a more standardized connector methinks.

The screen on the device is LUSH (haven’t used that word in a while!) – yep, it really cuts the mustard and gives a vivid, clear, and color-full display, which is only boosted by the Sense approach to UI (come to that a bit later). It is capacitance-based, so no pressing the screen here – and in case you might be worried, the sensitivity has been set just right.

Other than that, I should probably mention the Teflon-backing to the device, which gives it a pretty decent feel in the hand – given that it’s ‘stood up’ when you are using the buttons, that’s probably a good thing, since you don’t want to unbalance the thing and drop it (most of us have been there when you drop your device for the first time, and that sick feeling kicks in as it smashes/bounces/scratches on the floor!).

Hardware IS great, but it would be nothing with software – speaking of which…

The way the homescreen/idle screen has been put together by HTC  is verging on a stunning piece of work. Taking the approach made famous by other smartphone manufacturers, there are actually numerous (seven) homescreens – all of which are customisable with Apps, widgets, bookmarks, and shortcuts. The main homescreen (the one most of you might have seen) has a very famiilar clock on it – notably borrowed from the TouchFLO UI (found on HTCs Windows Mobile range of devices).

Now, an important point – TouchFLO is merely an iteration in HTCs approach to UI, of which the latest incarnation is called “Sense”. I am going to write more about Sense in a separate post, but, for now lets just say that a lot of the design cues you find in the Hero will be making their way in to future devices. 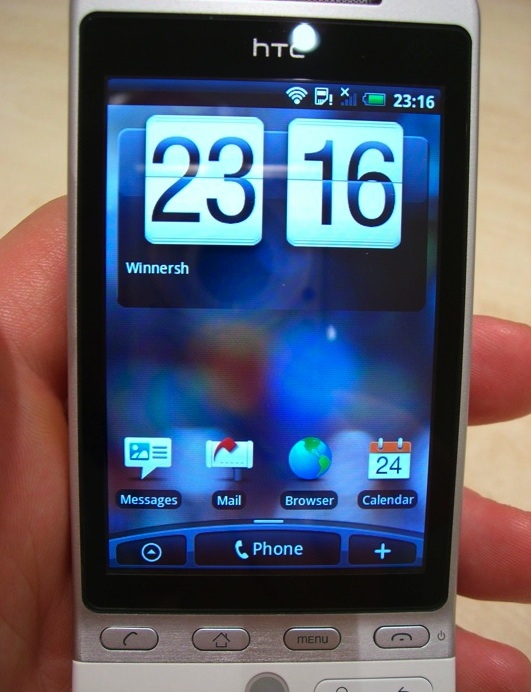 HTC Sense is in full evidence on the homescreen

Below you’ll see an image of another of the homescreens, showing a mix of tools, applications, and widgets (for contacts in this case):

So we know the UI and homescreen(s) are good – but let’s dig a bit deeper and check out the native applications themselves….

There are probably  a bunch of applications on a smartphone that you’ll use frequently, and let’s face it, you need to work well – for me these are:

On top of that, there are then another set of applications that you might not use daily, but that you might dip in to occasionally (for example the calculator). Well I’m happy to announce that the Hero copes with all of these well, and in some cases with great aplomb! Case in point – the browser! One of the major flaws we’ve seen to-date is the fact that Smartphone browsers do not handle Flash objects – well this one does! I loaded the HTC homescreen and product page (of which the latter contains a Flash module to navigate handsets), and the Hero dealt with the page really well. All I did notice was a slight slow-down in screen scrolling, as the page weight obviously was obviously having an effect on rendering. 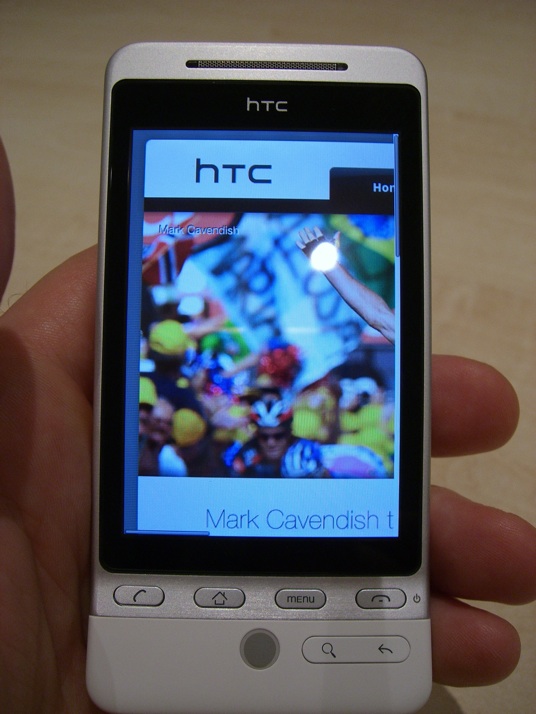 HTC website homepage rendering in full in the Hero browser

But the browser isn’t the only native application that works well – I’m happy to report that the messaging application is also VERY good. I was concerned that no other device was going to be able to match my iPhone in terms of touchscreen sensitivity when typing on an on-screen keyboard. But in various tests trying to trip up the keyboard and predictive text, it performed admirably well. The keyboard is obviously available to all the various messaging variants (SMS, MMS, Email), so it’s all good news as far as bashing out messages on this device 🙂 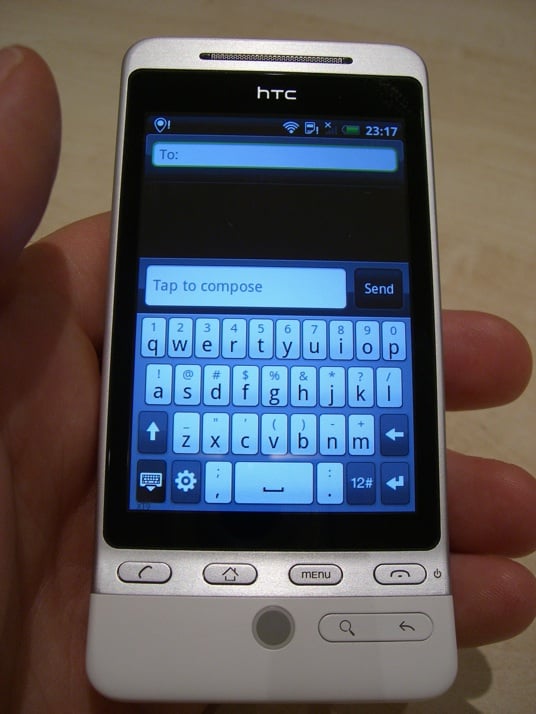 The Hero keyboard works very nicely thank you very much.

Another nice touch on the Hero is to put in all manner of ‘stubs’ to various social networking sites – for a certain percentage of buyers of the Hero, this is going to be an important thing – and so the ability to easily add access to the likes of Facebook, Flockr, and Twitter is going to excite some – for other, well it might just not get used 😉

So if the native applications are good, and you can customise the UI (which looks very nice) to your needs, what else do you need to know? Well, that’s why I’ve written a section below with some conclusions!

So the crux of all of this review stuff is – should you buy the handset? Well, if you are searching for a very capable smartphone, which you know is going to be supported well, and is toting a series of decent specs, then I think this could be the one for you. Actually, I think it’s the first device I’ve seen that presents a truly viable alternative to the iPhone – since it equals it in most respects, and dare I say, surpasses it in some (I was REALLY impressed with the homescreen/UI approach).

Of course, if the Hero were the same price as the iPhone, then it could be a very difficult decision – but it isn’t! The Hero comes out something like £50-£100 cheaper by my reckoning, taking in to account SIM-free pricing and some variance in specs. It certainly seem to me like that is a deliberate decision, particularly in these cost-sensitive times.

I like the Hero – a lot. I fact, more than a lot – I think I could grow to love the Hero over time, and the only reason I don’t right now is that I just don’t know it well enough – given more time with the world of HTC/Sense/Android, I think I could even be converted to move away from Apples little wonder! And that in itself should be praise enough!

(Footnote: I’m hoping to get much more time with the Hero in the coming months, so I can write a detailed ‘usage review’ – that should round out some more of the native and downloadable applications that I didn’t have the time to cover on this occasion)

So, we knew it was coming, and now, here it is. TELUS has officially launched the HTC Snap S510, albeit...