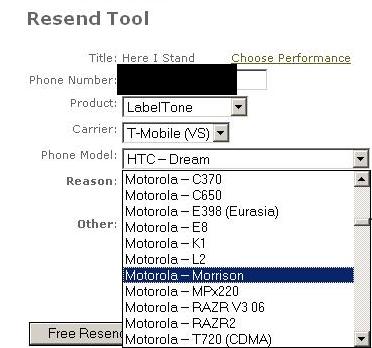 Motorola’s first Android handset, the Morrison, could be hitting the streets as soon as October 21st., according to a T-Mobile tipster. The device is already populating some internal databases, as pictured in this drop-down menu, although the date seems a little early, considering the last roadmap we saw had the Morrison slated for a holiday release, not fall. Of course, we won’t complain if Morrison gets out earlier, it’s just safer to err on the side of caution. The specs are still something of a mystery, but it looks like the Sholes will be the higher-end Android device.

Besides the awesomeness that was/is the TELUS HTC Touch Pro2 arriving over the weekend, another device is coming to the...