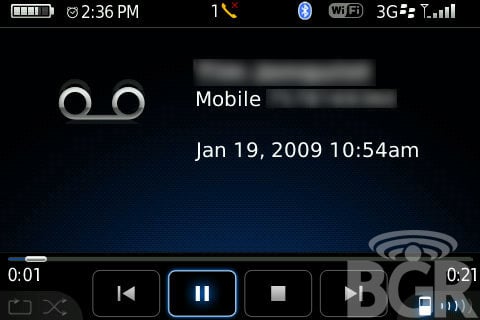 Visual voicemail on the BlackBerry Bold has been a feature looming since January, but rumour has it that AT&T subscribers will be able to activate it for free starting tomorrow. Some particulars of the service have also bubbled up, if you’re you’re interested:

Hopefully we’ll see the native visual voicemail app spread to other carriers shortly after making it to AT&T – it would even be nice if Google got around to integrating their Voice service here in the long run, although the existing Google Voice app for BlackBerry should do the trick for awhile still.

OS 4.6.1.284 for the BlackBerry Pearl Flip Now Available from Alltel

BlackBerry Pearl Flip 8230 owners, you'll be pleased to know that a new, official OS has dropped for your device....