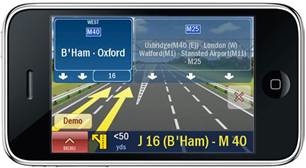 Those kind people at ALK Technologies have sorted me out with a copy of CoPilot Live for my iPhone, following my original post (here) on it’s release.

Interestingly, I just had a mount for the iPhone fitted to my car, so I was more than keen to give this App a go and see if it competes with standalone GPS modules that you attached to the windscreen. By my reckoning, a key thing about Sat Nav Apps (and much the same with standalone devices) is whether they thrash your battery, so I was relieved that my iPhone mount also doubles as a charging unit – leaving the worry of my battery behind for the moment. Anyway, more about the CoPilot App.

For this first impressions post, I decided I wanted a use-case that would mirror the situation of just getting the App, and then needing it suddenly. Fortunately that didn’t take very long, as we were off to visit friends who had moved house (and thus in a new location) at the weekend.

Having downloaded and installed the App (didn’t take too long), I popped the iPhone 3GS in to the car mount, flipped on the GPS (I usually have it turned off to conserve battery), and fired up the App.

Everything was blindingly simple. A little pop-up wizard gives you options of what you want to do, and I wanted to navigate via postcode. In the background the App was checking satellites, after I had given it permission to use my GPS location. I’d assume you might be able to triangulate your position using WiFi/3G if no GPS was available, but I didn’t test that.

Now, the App costs £25 in the UK, and that compares very favourably with the two other big contenders, Navigon and TomTom – they both come in around the £55-60 mark. I was wondering whether the lower cost would mean reduced performance or features – and with my first impressions review it was the performance I was doubly concerned about. I need not have worried – once I got past the keyboard for inputting the postcode (it’s not a QWERTY layout, which isn’t logical to me), then we were locked on and ready to go in a matter of seconds.

During the course of the 30 minute journey, the App was absolutely spot-on with it’s instructions, and the map was VERY clear indeed – way better than my standalone legacy Sat Nav. The vocal directions were good, and rather to the point: “take next turn” was common instead of “take the next turn” – which is merely me being picky about natural language support.

Overall though, the App was very responsive, accurate, and even the projected time of arrival was dynamically adjusted and ended up being very accurate indeed. So overall, an excellent result from a real use-case that many people might experience.

I’d heartily recommend this App based on basic usage, and I’d suspect the more advanced features will be good too – I’ll hopefully have some more real-world use cases to try them soon. In the meanwhile I wonder how the higher-priced solutions are going to compete and differentiate themselves, as CoPilot Live for the iPhone is very, very good indeed!

You can find CoPilot Live for the iPhone on the App Store, under the Navigation category.

It's been a long time since we first saw the Chipotle iPhone app hitting the AppStore. In January, Chipotle made...