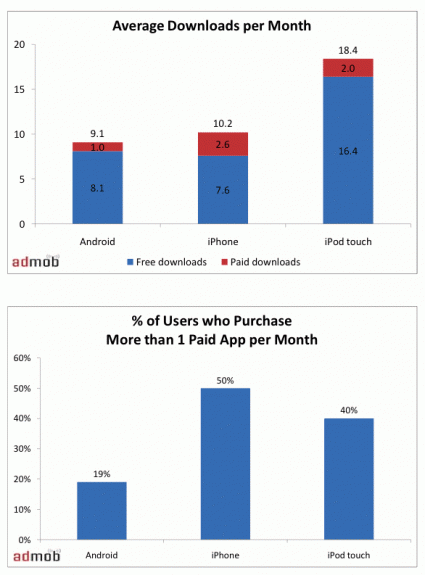 A new report from AdMob shows that Apple’s iPhone AppStore is big business, bigger than you could imagine. Official numbers are staggering. Apple’s own stats show that the AppStore is home to some 65,000 iPhone apps that have apparently been responsible for over 1.5 billion app downloads since its inception last year. But, that’s just the tip of the iceberg. AdMob estimates that Apple sells somewhere around $200 million worth of iPhone apps… per month. That has Apple moving something like $2.4 billion a year through the AppStore – 70% of which goes to developers. Apple is also responsible for 60% of US smartphone usage, according to AdMob.

But, as impressive as the AppStore’s cashflow numbers are, it’s prudent to keep in mind that Android handsets have yet to hit market with full force. Motorola is expected to announce their first Android smartphone next month in San Francisco, which should blaze a path for other manufacturers to bring more Android to the smartphone space.

Augmented reality is a reality for the US iPhone AppStore!

Just yesterday we saw the iPhone AppStore open the doors to Paris Metro Subway. The iPhone app, only supported in...