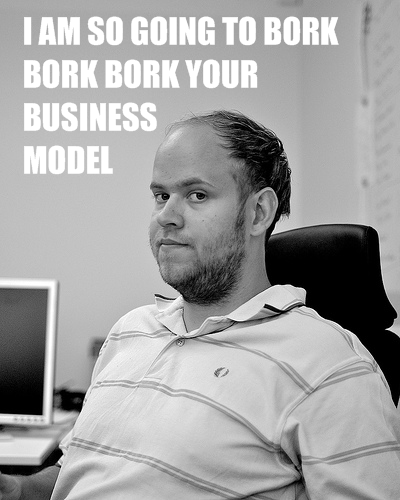 Spotify, the glorious application created by a bunch of Swedes (CEO Daniel Ek pictured above) that only runs in a few select countries in Europe currently, but plans to launch in America by the end of this year, created an iPhone application and even demoed it one month ago today. Has it made it to the App Store yet? Apple does say that 95% of iPhone applications are approved to go into the App Store after only a week; Spotify falls into the 5% category. A Spotify spokesman told mocoNews that they’ve “heard nothing back from Apple since they sent some follow-up technical questions a couple of weeks ago”. Why would Apple want to let Spotify onto the iPhone any how? Pay 10 euros a month and get access to all the music you want, plus the ability to even store some tracks offline onto the iPhone’s flash memory? Sounds too good to be true, and if Apple has any say in this, it is going to be too good to be true. Rhapsody is in the same boat, they submitted their application a few days ago. Let’s sit back and see how long until either of these go through.

Update: This seems to be a meme. Bitch about your App not getting inside the App Store, and then Apple contacts you to fix the problems. An Apple spokesman contacted mocoNews and told them:

I'm not even sure words are necessary here... if the idea of an iPhone Nano gets you excited, surely 'iDrops'...