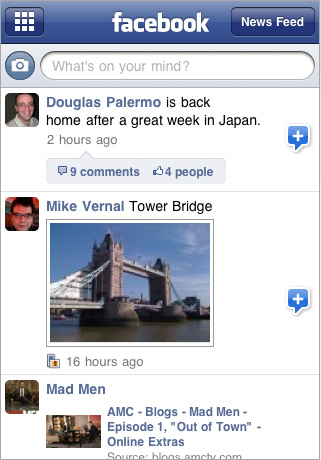 Facebook is everywhere. Everyone uses Facebook. If you’re not on Facebook, you’re either rebelling or living in a cave. Or both. So, what better platform is there to help mobile application developers pimp their wares than through Facebook’s own mobile offerings? Facebook today announced Facebook Connect for Mobile Web, which allows Facebook users to log in to compatible mobile web sites and mobile applications to using their Facebook login details. The new Connect for Mobile service also allows mobile apps to send updates to users’ Facebook accounts, giving mobile apps even more access to a user’s online identity.

But, that also makes the case for Facebook becoming a mobile app portal. A post from Inside Facebook points out that Facebook is uniquely positioned to help distribute mobile applications and games. Using their essentially unrivalled consumer-reach and their Facebook mobile apps and mobile sites, Facebook could easily give mobile devs more coverage by showcasing mobile apps that use Facebook Connect for Mobile. Turning Facebook’s mobile app into a de facto mobile app discovery engine could, in turn, make Facebook’s own mobile offerings more popular.

For all we know, Facebook is already working on this sort of feature as we speak.

Yo yo yo all you beat freaks! Star6 has announced the Star6 Video Freakout contest (http://agilepartners.com/apps/star6/contest/).  Star6 fans are invited...