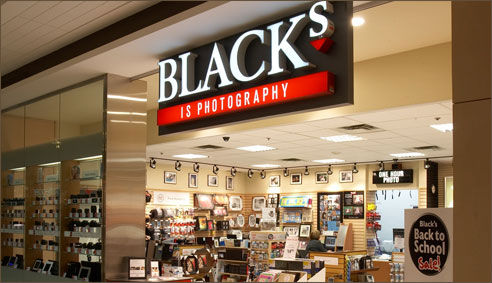 You probably haven’t heard of Black’s if you’re not from Canada; it’s a chain of photography stores up here, 114 locations all told and pretty popular overall. Well, it appears like the recession has hit them hard and for whatever reason, wireless service provider Telus has decided to snatch them up for $28 million. The end result will be that we’ll start seeing Telus phones in Black’s stores, seems like a strange fit to me. I can’t imagine there would be much tie-in with services… What are you going to do, order prints of your mobile photos? Doesn’t seem likely after seeing people with big boy cameras walking away with their own quality pictures. Diversification can never hurt, of course, and there’s bound to be some overlapping gadget love between mobile and photography. Black’s has already been trying to spread their wings a bit by selling GPS units. It would certainly be cool to see more wireless-friendly cameras out there – maybe hardware that lets you upload pictures directly from your camera to web services via 3G? Yeah, that’s mostly crazy talk, but there are cameras that are going in that direction.

China Unicom and Telefonica, both big names in global telecommunications, have announced an extended partnership in which they would provide...