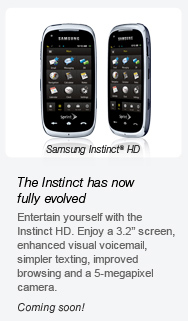 Sprint has shown the first public acknowledgment of carrying the Instinct HD, tucked away in their Premier Connection newsletter recently. Between the Best Buy pricing leaks and the hands-on pictures, we could see Samsung’s Instinct HD coming to Sprint a mile away, but you’d think they’d make a slightly bigger deal about the phone when going public; maybe Sprint didn’t want Samsung stealing any of Palm’s thunder with the Pixi. We still don’t know in terms of specs, aside from the 3.2″ screen, 5 megapixel camera and Wi-Fi support, but it’s probably safe to assume to display will be higher-quality than the standard Instinct. The newsletter blurb says “coming soon” but rumours are pointing to sometime before September 26th.

Samsung has prepared another version of its highly popular all-touchscreen handset - Star S5230, aka Tocco Lite in the UK....