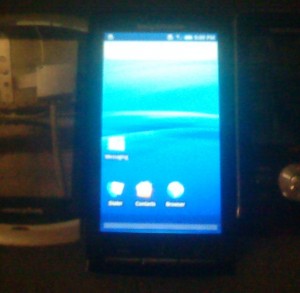 To date, we’ve only seen renderings of Sony Ericsson’s upcoming Android handset, the XPERIA X3 (code-named Rachael), but today we’re seeing some of the first hands-on pictures, blurry as they may be. The gallery shows the phone app, on-screen keyboard, locked, and home screen, so there’s not much to write home about, but it’s reassuring to see a concrete device. If you’re looking for more eye candy, pictures of a white version have also surfaced, accompanied by renders created using screenshots from the supposed user interface video. One of our commenters suggested that UI is actually a separate app which can be turned off if you prefer the vanilla Android interface, which would explain why we’re seeing the basic home screen here. Combined with the fact that the default background on the proper device shots corroborate with the video, this Timescape UI may very well become a reality. Can’t wait to pick up this bad boy? The latest rumours are pointing to a January launch.

Analyst: Motorola to release at least 10 Android devices in the next 6 to 10 months

Trip Chowdhry, analyst at Global Equities Research, issued a report, which was then picked up by Business Week, that claims...