Actually, Amazon is clearing out their lineup of AT&T phones today for almost free. All AT&T phones on Amazon are going for the bargain price of just a penny, and Amazon is waiving the usual activation fee (only until September 28) – no codes, no coupons, just a crazy good deal from Amazon. For all intents and purposes, Amazon is giving away their AT&T handsets to new customers. Of course, you’ll have to sign up on a new 2-year contract i 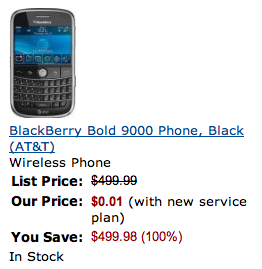 n order to get the penny pricing.

If you’re in the market for a new AT&T phone, you’ll want to check out Amazon’s website here. They’ve got some hot AT&T smartphones up for grabs – like the BlackBerry Bold 9000, Nokia E71x,  HTC FUZE (Touch Diamond), and BlackBerry Curve 8900. Cameraphone enthusiasts will be happy to hear that the Sony Ericsson C905a and its 8.1-megapixel camera is also available for just a penny.

Why pay someone for a thought when you can use that penny to buy a new AT&T mobile phone?