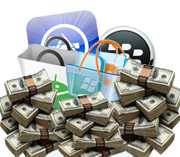 The mobile applications space is booming. Apple’s AppStore saw almost 1,400 iPhone apps launching in just a single day, that, in and of itself, could be taken as evidence that mobile apps are hot. And, with the increasing popularity of smartphones, mobile apps will continue to be a hot topic. So hot, in fact, that a new report from market research firm Yankee Group has forecast that smartphone mobile apps will drive $4.2 billion in revenue through the US by 2013. That growth rides on the back of an expected smartphone-surge that should take the US fleet of roughly 40 million smartphones to about 160 million in number by 2013.

The Yankee Group says that a quarter of all smartphone app downloads in 2013 will be paid apps. Today might be the age of the $0.99 paid app, but the average price of apps is expected to rise to $2.37 in the next five years. But, says the report, the success of paid apps will hinge on marketing and promotional campaigns that drive consumers to the apps.

In that case, anyone have a good idea for an iPhone app?

The flood of iPhone apps hitting the AppStore doesn't seem to be abating anytime soon. While the likes of the...