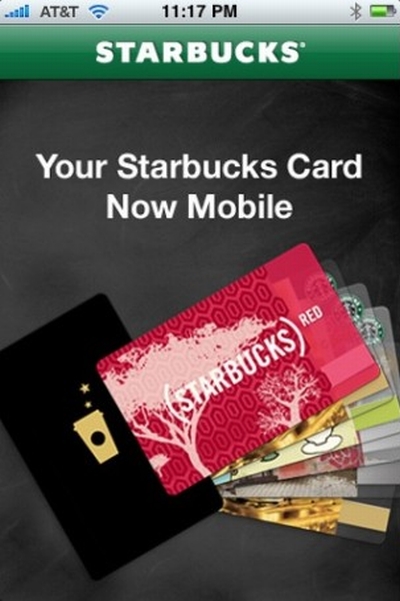 Starbucks, an international chain of coffee shops that usually have highly attractive young women serving coffee that can no longer be called coffee since so many additional mystical, magical, and foreign substances have been added to it, has released two iPhone applications. The first is called “myStarbucks” [iTunes link] and it can be used to find your local Starbucks, create drinks that have more names than a four time married Mexican priest, and also has the ability put a look of terror on your face by displaying nutritional information of your daily poison of choice. That’s the boring one. The second app is called “Starbucks Card Mobile” [iTunes link] and allows you to pay for your distilled capitalistic brew with your iPhone, along with viewing your transaction history and allowing you to top up your Starbucks card with your credit card. It isn’t a very complicated concept: you simply enter your Starbucks card number, and password, and the application displays a special barcode that the cashier can scan. This doesn’t work at all Starbucks locations however, it is being tested in 16 stores in Seattle, Washington and San Francisco, California, and pending the results of the trial, Starbucks will decide whether or not to roll this out nationally. Excited?

Videos: Layar, the Android augmented reality application we all love, is going 3D this November

Layar, which came out only 3 months ago and has received a hell of a lot of hype, is adding...