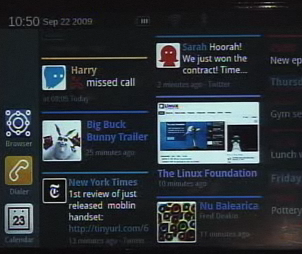 Moblin started off as Intel’s operating system aimed at making the most of netbooks and MIDs powered by its lower-voltage Atom processors. But, Intel now seems to be redirecting its efforts towards to mobile space. The Moblin demo showed obvious signs of its mobile phone aspirations – missed calls notifications, for example. And, with Moblin’s focus on social network aggregation, it’s clear that Intel has its sights set on the smartphone space.

The open-source Moblin OS is still in development, but from the looks of the live demo on the IDF09 keynote stage, Intel’s got a possible winner on its hands. The demo reveals some interesting factoids. Moblin apparently runs on touchscreen devices. It support mobile apps. And, best of all, Moblin can run multiple apps in the background – all organized by a slick multi-task manager!

With a little UI polishing and manufacturer support, Moblin could very well give Android OS and the heralded iPhone OS something to worry about.

You know that Pizza Hut iPhone app that lets you order pizza straight to your door without having to utter...