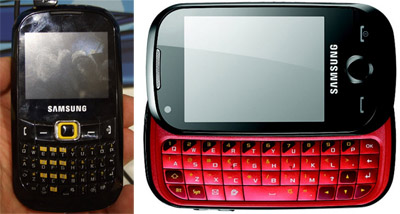 We knew Samsung was working on a QWERTY keyboard-equipped Corby-like device – B3210. However, at the stage when we first covered the phone, we got no clue it will really wear the “Corby” mark. Now we know it does and that it’s not the only Corby texter phone.

Specs wise, the Samsung CorbyTXT B3210 comes with a 2-megapixel camera, changeable battery covers, 3.5 mm audio jack, FM radio, as well as such installed applications as social networking app (access to Twitter and Facebook) and the multi-network instant messaging client. The Korean giant will launch the device in Europe during next week.

The other Corby texter unveiled is the Samsung CorbyPRO — pictured on the right — which comes with a slide-out QWERTY keyboard as well as 3G and Wi-Fi connectivity. Camera is better than the one found on the CorbyTXT (3-megapixel), and there are also (in addition to B3210’s features) dedicated music control keys, push-email and threaded SMS support. The device will start shipping in Europe in November.

We’ve no doubts Samsung will price the two phones properly, hence sell tons of these. The way I see it, both of them are perfect phones for young, savvy folks.