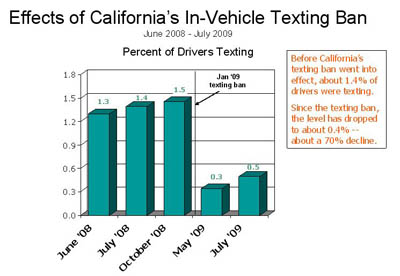 Results recently posted by the Automobile Club of Southern California seem to prove that the ban is doing what it was intended to do. Cut the number of drivers dangerously texting while driving. Since the ban went into effect on January 1st of this year, there has been about a 70% decline. Solid.

“The Auto Club had questions about whether a texting ban could work in California,…No one had studied the effects of a ban before. We knew that it would be difficult for police to cite drivers texting in their vehicles. Although there hasn’t been a great number of citations issued, it appears that drivers are getting the message that texting is a dangerous and unsafe activity behind the wheel.”

Bottom line: Cellphones and driving don’t mix. If there are no bans in your area, stop anyways. You can always call or text that person back when you have a few moments. If it’s really urgent, heck, just pull over and do what you need to do.

Side Note: If you’re looking for a solid Bluetooth Headset to give you some handsfree freedom, you may want to check out Daniel’s hands-on review of the upcoming Jabra ‘Stone’. Awesome 🙂