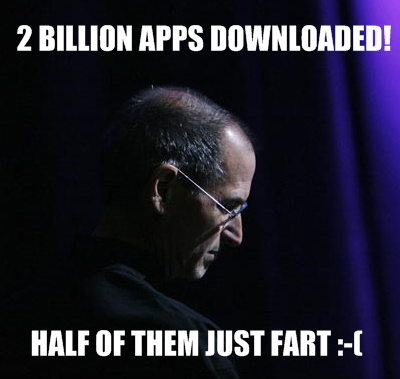 Apple has just released a number heavy press release, here is what you need to know:

And of course, two quotes from Steve Jobs:

“The rate of App Store downloads continues to accelerate with users downloading a staggering two billion apps in just over a year, including more than half a billion apps this quarter alone,” said Steve Jobs, Apple’s CEO. “The App Store has reinvented what you can do with a mobile handheld device, and our users are clearly loving it.”

Peter Kafka, from The Wall Street Journal did some maths to figure out that it took Apple a little over a year to reach the 1.5 billion download mark, which meant users were downloading apps at a rate of 4.1 million per day. From that point, it took only 76 days to hit 2 billion applications, so the rate of users downloading apps is now 6.6 million per day. Pretty impressive stuff.