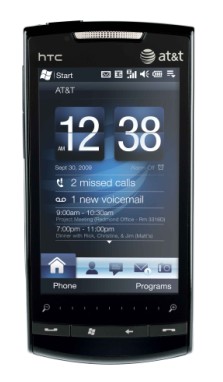 The AT&T PURE is everything you’d expect to see from a lightly-branded HTC Touch Diamond2 (check out our review here). AT&T’s version of the Touch Diamond2 sports a glossy black finish, accentuated by a metallic strip along the backside that highlights the 5-megapixel autofocus camera. As for the guts, the AT&T PURE features a 3.2-inch WVGA touchscreen (resistive, but much improved), 3G data, GPS, WiFi, accelerometer, light sensor and microSD card slot – basically what you get in the HTC Touch Diamond2. We were impressed by the HTC Touch Diamond2 when it was powered by Windows Mobile 6.1, so the PURE’s WinMo 6.5 underpinnings are sure to impress.

For those that need a super-big display and a slide-out QWERTY keyboard, the AT&T Tilt II should come in handy. The Tilt II sports the 3.6-inch WVGA touchscreen (resistive) and slide-and-tilt QWERTY keyboard that won our hearts as the best business smartphone in its class. Inside the Tilt II, sports the much the same feature-set as the AT&T PURE. The Tilt II camera packs just 3.2-megapixels (compared to 5-megapixels on the PURE), but makes up for it with a dual-speaker/dual-microphone speakerphone for noise-cancelled conference calls. 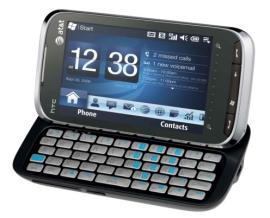