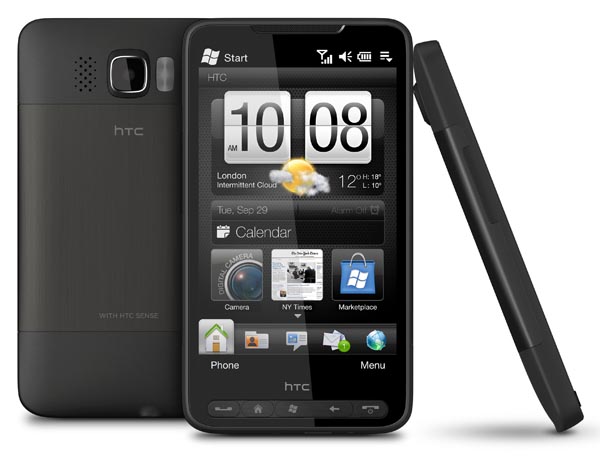 Big-screen lovers, capacitive touchscreen fans and smartphone users “in the know” will be happy to hear that the HTC HD2 (aka Leo) is almost here. HTC has today announced that their HTC HD2 will be launching later this month in select European markets. Boasting a class-leading 4.3-inch WVGA capacitive touchscreen (a first for Windows Mobile smartphones!), blazing fast 1Ghz Snapdragon chipset (a first for HTC) and a 5-megapixel autofocusing camera, the HD2 packs some serious processing and multimedia power under its slim 11mm thick shell. And, as HTC’s first Windows Phone to sport the smartphone maker’s custom Sense UI, the HTC HD2 isn’t just a pretty face, it’s also easy to get along with.

The HTC Sense UI rose to fame as the Android-powered Hero’s slick homescreen interface. And, this is the first time we’re seeing aspects of the multi-pane Sense UI making its way to Windows Mobile, and it looks promising. The new Windows Mobile 6.5 Professional interface has been re-worked to play nice with finger inputs, but it took HTC’s Sense UI to polish it to a touch-optimized shine.

The HD2’s Windows Mobile-based Sense UI also brings along a couple additional features from its Android roots. For one, HTC’s Peep Twitter app makes the jump from Android to Windows Mobile. Another new feature is integrated support for photo uploads to Facebook and Twitter. Facebook also syncs up with the address book.

As for hardware, the HD2 is the first HTC smartphone to take advantage of the powerful Qualcomm 1Ghz Snapdragon chipset. Paired with generous RAM stores, the HD2 should make quick work of anything you can throw at it. Hopefully, that also spells the death of the dreaded UI lag that WinMo users have been gritting through all these years. The 4.3-inch capacitive touchscreen is as big as they come in the mobile space, and the 5-megapixel camera takes impressive photos. The feature-set rounds out with a heaping portion of smartphone trimmings – 3G, WiFi, GPS, Bluetooth 2.0, microSD slot, FM radio and a digital compass.

An optional car mount kit turns your HTC HD2 into a fully functional turn-by-turn GPS navigation system. We can see a dash of Apple’s design aesthetic in the HD2’s car mount, but that’s just fine by us.

Suffice it to say that the HTC HD2 is going to turn heads on the street. Unfortunately, those streets will only be in Europe for the time being. Launch is expected later this month in the EU, with O2 in the UK possibly launching on October 12 and Vodafone Spain aiming for a November launch window. Additional markets should go live shortly after. Price? €649, but it’s not like it even matters. We’ll trade a kidney for an HD2. What about it, HTC?

AT&T launched the HTC PURE late Sunday evening as the first Windows Phone (get used to seeing that more) to...