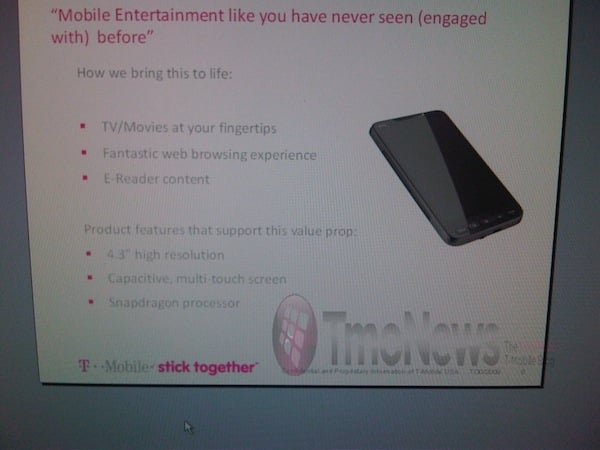 The baddest Windows Phone of the year may just be coming to Stateside on T-Mobile USA’s network! A newly discovered T-Mobile slide suggests that the HTC HD2’s (Leo) will soon be available on T-Mobile USA. The slide highlights the HTC HD2’s massive 4.3-inch WVGA capacitive touchscreen, 1Ghz Snapdragon processor and multimedia capabilities in a push to bring T-Mo customers “mobile entertainment like you’ve never seen (engaged with) before.” If that’s not enough to believe that HTC sold T-Mobile on the HD2, we don’t know what is.

If you haven’t yet checked out our hands-on coverage of the HTC HD2 (Leo), you might want to brush up on what we consider to be the hands-down best Windows Mobile 6.5 smartphone of the year. The HD2’s gigantic capacitive touchscreen and pencil-thin silhouette make for a sexy handset, but there’s more to the HD2 than just a pretty face. Underneath, the HD2 packs a 1Ghz Snapdragon chipset, 5-megapixel camera (with dual-LED flash), integrated GPS, WiFi, microSD slot, FM radio, digital compass and a 3.5mm headphone jack. And with HTC’s HTC’s “>TouchFLO 3D (which has been tweaked to reflect HTC’s Sense design philosophy) making up for much of Windows Mobile 6.5’s downfalls, the HD2 is one helluva Windows Phone.

The T-Mobile slide makes no mention of when we should expect to see the HD2 hitting the US, but it can’t be too far behind the Nov. 11 European launch. Oh, and it’s probably a good idea to start scrounging for couch change. This bad-boy isn’t going to be cheap!

I’m Getting Tired of ‘Storm Chasing’. The Latest BlackBerry Storm 2 Rumors Are In.

Color me frustrated. The BlackBerry Storm 2, aka 'Odin' rumors and speculation seem to be reaching a crescendo, and unfortunately...