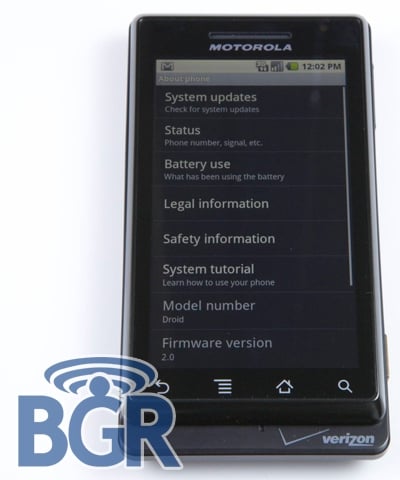 Stay tuned to The Boy Genius Report website, something tells me he is going to post more pictures pretty soon.

For those of you who don’t know what you’re looking at above, that is the Motorola Sholes, the long awaited Verizon device rumored to be running Android on top of the fastest hardware on the market, the ARM Cortex A8. As you can see from the photo above, it looks like it is running Android 2.0, a version we know absolutely nothing about … yet. The Sholes hit the FCC a little over 2 weeks ago, and blurry spy shots appeared around the same, but this is the first time we have a clear shot of the Sholes, which I guess I should stop calling Sholes since it’s now known as the MOTO DROID.

I’m Getting Tired of ‘Storm Chasing’. The Latest BlackBerry Storm 2 Rumors Are In.

Color me frustrated. The BlackBerry Storm 2, aka 'Odin' rumors and speculation seem to be reaching a crescendo, and unfortunately...