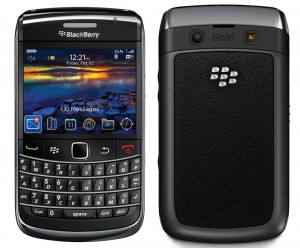 RIM’s new flagship device, the BlackBerry Bold 9700, has been officially announced. If you’ve been following the latest leaked videos and pictures, you’d already know a fair bit about this device (including that it’s coming to AT&T, T-Mobile, Vodafone, Bell, Rogers, telus and maybe even wind) but here’s a spec run-down anyway:

For those currently rocking the original BlackBerry Bold 9000, upgrading to this bad boy would provide you not only with added application memory, processor speed, and an upgraded camera, but extra style by way of the optical trackpad, slimmer dimensions, and overall revamped style. Don’t worry, the keyboard you know and love has changed very little, and the leather backing is still there, if you’re into that kind of thing. Anyone who had passed up on the 9000 because it looked like a fatty next to the Curve will probably be reassessing their options this go-around.

OS 5.0 is also included in the new Bold, some of the improvements from which we’ve seen in the Storm2. A lot of the really cool enterprise stuff, like flags and remote e-mail lookup will be available for those companies who have upgraded their BES to 5.0 and have devices like the Storm2 9550 and Bold 9700 among their employees; in good time, though, OS 5.o will likely find its way to the most recent BlackBerry models.

There’s no official info on carriers or pricing, but they are expecting it to be picked up in November, just in time for Christmas.

UPDATE: Rogers has confirmed that they’ll be offering the 9700 for $299.99 on a three-year plan. T-Mobile and AT&T will both be selling the Bold for $199.99 on a two-year term. Bell and Telus have also confirmed the 9700; although with no price point, they’re saying November.

Got a question? New iPhone app has your ‘kgb Answers’

Answers to just about any question you're likely to come up  with are usually no more than a Google search...