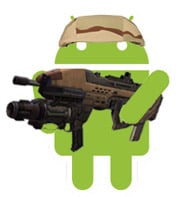 Google’s Android mobile operating system is apparently good for more than making your smartphone fun and powerful. Military defense contractor Raytheon is putting the Android platform to work in their new Raytheon Android Tactical System (RATS) battlefield networking system. The system makes use of relatively cheap mobile terminals powered by Android OS to connect soldiers in the field with other soldiers and military assets. With Raytheon’s RATS system, soldiers will have real-time access to recon data, friendly unit locations, and even biometric/photo analysis. How cool is that?

Like a military-grade social network, RATS allows a soldier on the battlefield to track their “buddies” on a map in real-time. If a particular “buddy” happens to be a UAV, the soldier can pull up a live video feed from the unmanned aerial vehicle’s camera. And, if a RATS-enabled soldier comes across some juicy intel, he can share that data with military egg-heads over the DoD’s network. Future plans for the RATS system include the ability to add modular biometric scanners to RATS devices. Fingerprints might one day be scanned in the field and sent to military analysts back home for processing.

Raytheon has been working on RATS for over two years, and has baked in most of the features into its the current version of the RATS Android application. The system might see deployment with the DoD in as little as two months, possibly followed by contracts with the Department of Homeland Security and other law enforcement agencies.

We knew Android was going to be big in the mobile space, but now it’s looking like Android could carve out a niche in the military. What’s next? Android OS-powered military androids?

Anyone that regularly reads IntoMobile will know that I think the Groovemaker range of Apps are awesome (here and here) –...