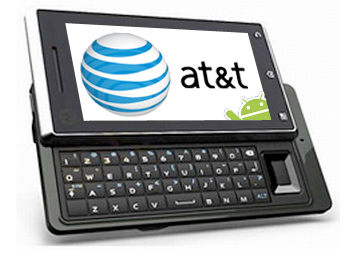 The Motorola Droid has so far only been confirmed for Verizon Wireless. In fact, the Droid could become a fantastic hit for Verizon when it launches later this year. But, that doesn’t necessarily mean Verizon will be the only carrier to offer Motorola’s high-end Android smartphone. Just last week we saw the Motorola Droid pass through the FCC with GSM frequency support, signaling Motorola’s intent to bring the Droid/Sholes/Tao to GSM networks. Today, the folks over at MobileCrunch have been tipped to some solid evidence that a GSM Motorola Sholes/Tao is headed to AT&T with full 3G support!

That’s good news for those you of out there impressed enough by Motorola’s Sholes to give the ailing mobile phone maker another chance at glory, but not willing to be tied to Verizon’s CDMA network. A GSM version of the Motorola Sholes probably won’t launch on AT&T with the Droid brand, but should hold onto all the good stuff that makes the Sholes a formidable player in the Android space – 3.7-inch touchscreen, 5-megapixel camera (with flash), 3G data, WiFi and GPS.

And, seeing as how AT&T’s version of the Motorola Droid will support the same 850/900/1800/1900Mhz bands that Rogers uses for their 3G network up in the Great White North, our Canadian friends have something to look forward to too!

"Don't Text and Drive." So reads the tagline of Verizon's latest advertising campaign aimed at preventing thoughtless drivers from putting...