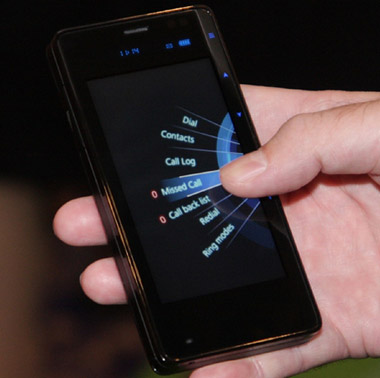 It was long time ago when we reported that ACCESS (the owner of the original Palm OS which it re-christened to Garnet OS) is working with Emblaze and Sharp to create “revolutionary mobile device.” It seems they finally managed to bring their project close to the end, and voila – a press release has been issued, announcing the new mobile OS called ELSE INTUITION. It’s all about user interface these days and these folks know that. Hence the mentioned release adds the good ol’ “revolutionary” adjective before the phrase.

Unfortunately, we don’t have screenshots to prove the claim, but a single image above shows some merit. Still, until we test this for ourselves, we’ll keep a dose of skepticism, as we’ve heard similar claims in the past.

Finally, it’s worth pointing out this isn’t ACCESS’ first mobile Linux project. Their earlier efforts proved as a total failure as they struggled to convince anyone to jump on board. This time, however, they seem to have a better product. The only problem is the over-crowded mobile Linux market, which seems unready for another player. We’ll see…

Orange France is the latest carrier to jump on the Nokia Messaging scheme. The France Telecom-owned operator will offer the...