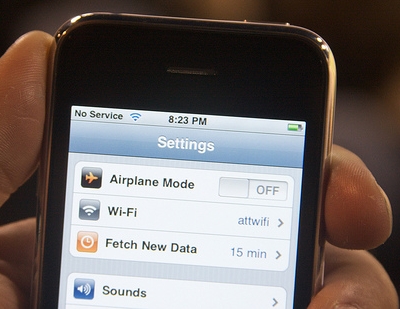 Brough Turner, who has been working in the telecommunications industry since 1983, has a hypothesis: AT&T’s wireless network has configuration problems. He believes that the size of the buffer in “the last router between the high capacity core network and the actual over-the-air data path to a subscriber” is configured improperly, and that it is causing ping times to either be very good, under 200 milliseconds, or horrible, in some cases reaching as high as 8 seconds. Many iPhone users can attest to this on AT&T, it either works wonderfully or doesn’t work at all.

I find it odd that of all the countries that have GSM technology, America has not figured out how to properly implement a wireless network properly. Now I know the argument for the iPhone failing in big cities is conjestion, but this recent tweet from Eric Zeman, Editor at Phone Scoop, is telling:

Friend of mine just called me from Shanghai. China Mobile kept his call connected through his entire commute of 25 miles.

In 2007 Shanghai had a population density of 13,400 people per square kilometer. It ranked as the 10th most dense city in the world. The most dense American city is Los Angeles with 2,700 people per square kilometer; it ranks 90th. Why is it then that the Chinese can figure out how to use GSM, and the Americans can’t? Seriously, I’m always blown away when I hear horror stories about people finding “dead zones”. The closest thing to a “dead zone” I found in Finland was on a summer holiday in a cabin with a few of my friends in the middle of no where. I had full signal, but mobile data wasn’t supported so I had to rely on voice and SMS instead of email and Twitter.

Brough isn’t saying AT&T doesn’t have enough cell towers up. That’s a given. What he is saying is that the towers that are already up, the wireless network itself, isn’t setup properly. I wouldn’t be surprised if he was right.

The Motorola Droid has so far only been confirmed for Verizon Wireless. In fact, the Droid could become a fantastic...