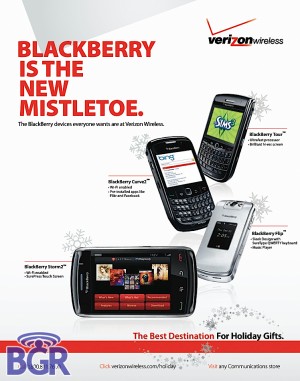 It looks like the BlackBerry 8520 will be getting an update that includes 3G connectivity, according to an internal Verizon newsletter, but details are scarce, aside from what we already know about the 8500-series Curves having Wi-Fi. The Curve2 likely has something to do with the projects code-named Essex or Atlas, which were meant to be a companion to the Tour that would have Wi-Fi (and the Essex specifically having a trackpad). However, I think the overall assumption was that either one would still be packing the Tour form factor, complete with nicer screen and camera. In any case, for those hungry for a Wi-Fi-enabled CDMA BlackBerry and can’t stomach the Storm2’s SurePress or won’t wait for an updated Tour, the Curve2 will be their only option. To get a feel for what the device might feel like, check out our BlackBerry 8520 review – just tack on Wi-Fi and likely OS 5.0.

Other devices to make an appearance in the newsletter include the HTC Imagio, Ozone, enV Touch, enV3, Chocolate Touch, Rogue, Intensity, Alias2, and the white Pearl Flip; of course, Droid gets a two-page spread to itself.

Documents to Go, one of the big name mobile document apps for BlackBerry, has updated to version 2.0 and has...