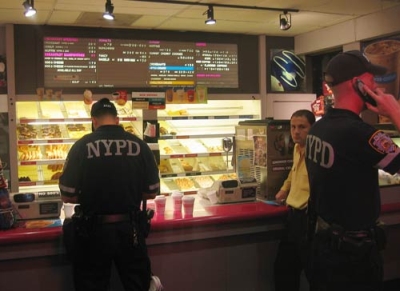 Police officers from New York City issued 7,529 tickets last Thursday for people using their mobile phones behind the wheel. This 24 hour crackdown wasn’t as successful as the one earlier May which resulted in around 9,000 violations issued, but a far higher number than the usual 540 tickets that are issued on a daily basis for texting/calling behind the wheel. Last year the NYPD issued 197,198 tickets for being a douche who thinks that they’re so important every single call and text must be acted upon with the utmost urgency.

In other news, a record number of rapes took place last Thursday. When one of the few men caught asked what was so special about Thursday, he replied: “all them cops are going after people who pay their tickets real fast in order to avoid going to court, so us rapists saw this as an opportunity to take to the streets and add some notches to our belt.”

Update: The NYPD have issued a statement: “Oink. Oink. Oink.”

In the middle of August, AT&T was on the receiving end of a class action lawsuit in Louisiana for not...