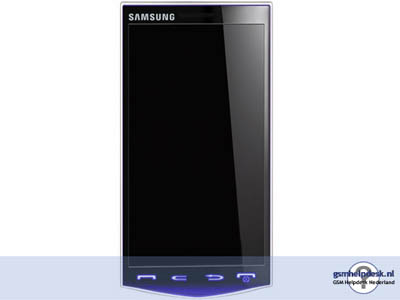 In case you missed it, back on Tuesday Samsung announced their new mobile OS dubbed ‘Bada‘. While the announcement was all well and good, there was absolutely no mention of features, screenshots, or anything else that may have tickled our curiosity bone. Boo-urns on Samsung for sure… Boo-urns. For those of us that want to know more, we’re going to have to wait until December, when the Korean company will unveil Bada at an event in the UK.

It’s quite interesting to note that Samsung develops hardware for Symbian, Win-Mo and Android… yet, I suppose that’s not enough. They want their share of the OS market and are going for it. Good on ’em, but me thinks it’s going to be a tough slog.

Today, a shot of what appears to be Samsung’s first Bada OS handset has leaked out via GSMHelpDesk. You can of course check it out above. No details, specs, pricing or anything else has been found, which leaves me wondering if this is real or not. Photoshop or not, what do you think? Stylish and sleek? Or are you one of the crowd that says ‘Who cares, show me the OS’!?

Well what do we have here? A Palm Pixi sighting... at a Walmart? Yeppers, that's exactly what we've got. PalmTwit...