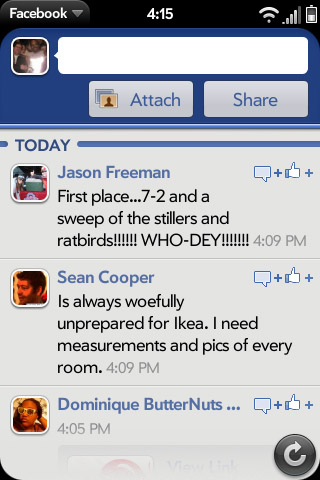 Following the new webOS version release, Facebook has released its official mobile app for the platform. Unfortunately, this seems like some kind of a beta version as aside from updating your status and uploading a photo, you can’t do much more. Search is non-existent, filtering is out (yeah you won’t be able to avoid Farmville updates), and by clicking on someone’s name or photo you get their contact info. Why?

I do understand the platform is still young and honestly there are not that many people out there with Pres. In that sense, I can understand Facebook for thinking “something’s better than nothing” but I do hope they’ll fix this sooner rather than later…

One last thing – that new version of webOS (1.3.1) is required for Facebook to run.

Deal: Agile Messenger for iPhone available for only $1.99 until November 30th!

Agilemobile.com announced that their popular multi-network IM app, Agile Messenger for the iPhone and iPod Touch, is now available for...