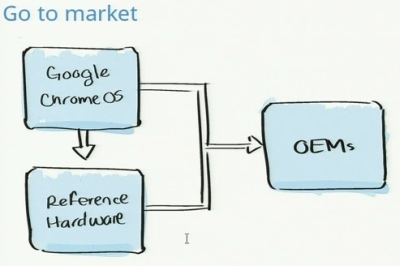 I just finished watching Google’s live webcast announcement of Google Chrome OS and besides being let down that we, as in general consumers, are not going to be able to play with it for a year, I was stunned to hear Google admit that they’re going to be creating reference hardware. Google will not only be building the software for Google Chrome OS, but they’ll be handpicking, and optimizing software for, the hardware that will be under that thin Chinese plastic case we call an exterior. This is big stuff.

Why would Google want to do such a thing?

Microsoft’s Windows operating system runs on over 90% of the computers on the market today. It wasn’t easy getting 90% market share, they had to make sure Windows ran on every type of hardware configuration known to man. Most people who experience Windows crashes are not actually experiencing Microsoft Windows crashing, they’re experiencing faulty drivers written by 3rd parties crashing and in turn bringing down the whole operating system. Google is going to hand pick which configurations they’re going to support and then tell the people in China and Taiwan who build netbooks to use said specified components. Doing this will let Google worry less about driver support, and pour more resources into optimizing their software.

What about Google’s Android operating system?

It would not be a stretch to say that Google could start doing the same thing for Andoird. As versatile as Android is today, supporting multiple processors, screen resolutions, and input methods, what is to stop Google from saying something along the lines of “we’re going to optimize Android 3.0 for the Qualcomm Snapdragon, so if you want to be first to market with an Android 3.0 device we advise you to call Qualcomm.”

I’ve been teasing Michael Arrington from TechCrunch, telling him he is totally wrong about Google making a Google Android phone. Well maybe he is partially right. Google isn’t exactly making a phone, but they could be telling OEMs that they’ll be optimizing Android to run on a tightly knitted set of specifications.

The very handy (or should I say hands free?) Drivesafe.ly app for BlackBerry has apparently reached the 1 million user...