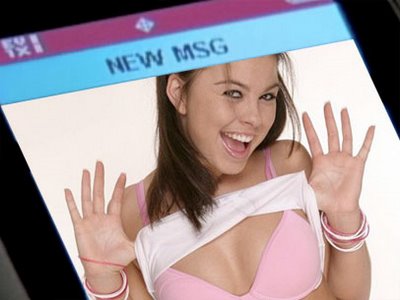 MTV and the Associated Press surveyed 1,247 people between the ages of 14 and 24 in September to find out what they thought about sexting. For those unfamiliar with the term, sexting refers to people sending naughty photos to other people. Of the people who admitted to sexting, half of them didn’t see sexting as a big deal, while the other half called it a serious problem. Makes you wonder why they still went through with it? Anyway, more stats: 1/3 of “young adults” have sexted while only 1/4 of teenagers have done the same. Around 14% of the people who sent naughty images were suspiciousness that the recipient may shared them with others, and as it turns out 17% of people who received a naughty image have admitted to forwarding it to someone else. Boys were more likely to receive a forwarded image than girls, which makes absolute sense when you think of how hooped up on hormones those stuttering pimple faced walking erections are in High School. Forwarding an MMS is easier than pirating pornography.