Paul Pinnock left Psion, the once famous British company who pioneered the mobile computer space, in 1995 to start POS Limited. His new company offered service and support to Psion owners, a group of people whose dedication to their machines is equal to that of Apple fanbois from the 80s and 90s. One of these Psion owners recently asked Paul if he could replace the modem in their Psion 5mx, and that’s when he realized he needed to make something from scratch that can better operate in today’s world.

Enter the PsiXpda, a 174 mm x 84 mm x 25 mm device weighing 430 grams running Windows XP on top of a 1.1 GHz Intel Atom processor with 1 GB of RAM, 16 GB solid state disk drive, with WiFi, Bluetooth and built in 3G. It has 1 full size USB port, 1 mini USB port, microSD card slot, a 5 inch 800 x 480 pixel resolution display, 2.5 mm headphone jack and a 1850 mAh removable battery. It will run for 2 hours if you connect it to the internet, 4 hours if you turn connectivity off. It will cost you 500 British Pounds when it begins later this month. 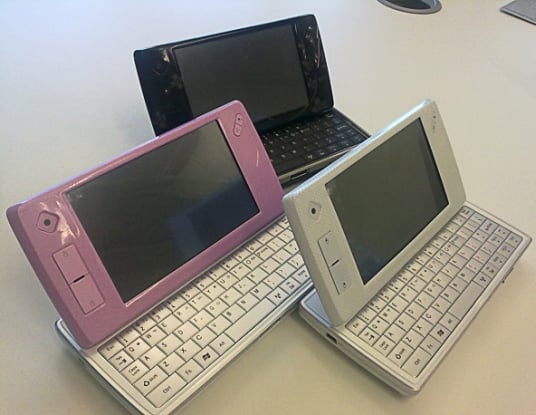 It’s supposed to be the Psion 5mx of the new century, hell it even looks like one, but what really made the Psion 5mx, the software, has been lost in translation. Granted, the Psion applications that once rocked a decade ago look dated now, and have since been replaced by internet equivalents that can be accessed across a wide range of hardware, but don’t forget that the Psion ran on 2 AA batteries for more 15 hours. It may not seem fair to compare 10 year old hardware to the PsiXpda, but when that brick of yore has been so unashamedly used for inspiration, a comparison simply has to be done.

Ewan Spence, one of the Editors at All About Symbian and a regular member of their weekly podcasts, joined PsiXpda about a year ago to help get the product off the ground. I point this out because he isn’t as well known as Michael Arrington from TechCrunch, yet his attempt at getting a hardware project off the ground has resulted in success, while Michael’s has crashed and burned. Ewan admitted that the PsiXpda project isn’t going to sell millions of units, nor hundreds of thousands, but if they can ships a few tens of thousands then they’ll be happy.

As a fellow Editor myself, I know how easy it can be to tear a product a new asshole. After all a company like Nokia, Apple, Google or RIM has thousands of employees, each with a wide range of talents. The team making the PsiXpda is small, as in barely double digits, and they have to do everything, from the design, to the marketing, to the logistical nightmare of sourcing and distribution. The PsiXpda may not be for me, I prefer a larger screen and keyboard, but for the people who are interested in such a device then you have my full recommendation that Ewan will stand behind his product and give you the attention you deserve if the situation ever arises where you need support.

For more information on the PsiXpda check out their homepage.

[Photo above from Read Write Web]

Chinese manufacturer ITG has announced the preorder availability for their new xpPhone, a beast with a 4.8" display that, you...