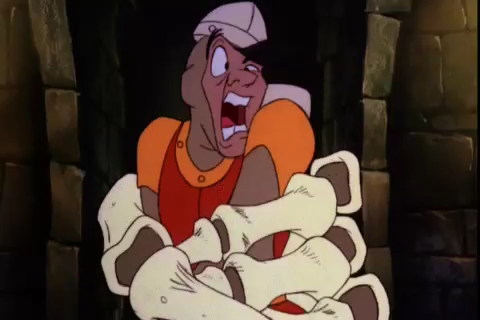 EA Mobile announced today they have brought the timeless gaming classic, Dragon’s Lair, to the iPhone / iPod Touch.  Dragon’s Lair for the iPhone / iPod Touch stays true to the arcade classic in Arcade Mode, but it also offers the laserdisc version in Home Mode.  Dragon’s Lair is a brutally difficult game, which is why EA also some “boosts” to the game, such as infinite lives or being able to highlight portions of the screen that players will need to interact with.

If you grew up visiting the local arcades in the 80s, then you’re all too familiar with Dragon’s Lair.  If you were the type to be doing actual outdoor activities that involved sunlight, green grass, and friends, then allow me to fill you in.  Dragon’s Lair has you playing as Dirk the Daring, who is on a quest to save Princess Daphne from the evil dragon Singe.  The game plays like an interactive cartoon where certain scenes would play and it’s up to the player to figure out how best to interact in order to progress through the levels.

Dragon’s Lair for the iPhone / iPod Touch retails for $4.99 and is available right now in the App Store!

ThinkFun’s original Rush Hour game is in the AppStore

ThinkFun launched the "original Rush Hour" game in the AppStore. The popular logic puzzle game is available in free and...