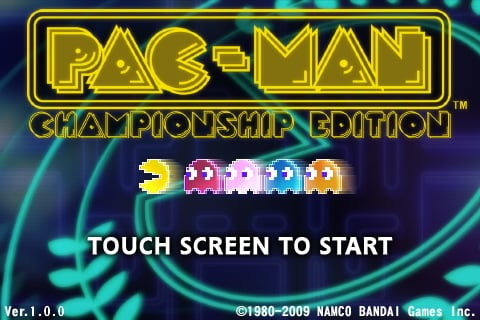 In Pac-Man Championship Edition, Namco takes the classic gameplay mechanics of Pac-Man and adds a fresh coat of updated graphics and two game modes, Mission & Championship, with an additional Challenge mode that can be purchased through an expansion pack.  Mission mode challenges players to complete a specific task such as collecting 3 pieces of fruit, or eating a specific number of ghosts in order to complete the mission.  Players can revisit a mission to attempt to complete it at a different difficulty level.  Championship mode feels more like the traditional Pac-Man game, but instead of progressing by way of eating all the pellets in a level, this mode requires you to beat the top score within a time limit.

There are four different control schemes to play Pac-Man Championship Edition so anyone should be able to find a way to play comfortably.  The only thing I wish Namco would have included were leaderboards so I can compare my score with my friends.  Hopefully Namco offers something in the future (might i suggest Facebook integration?) because as of now, Pac-Man Championship Edition has a lot going for it.  There’s no word on pricing, but the XBLA retails for $10.

Want to try out something weird on your iPhone? Check out MeowWalker, a simple game which sees you controlling a...