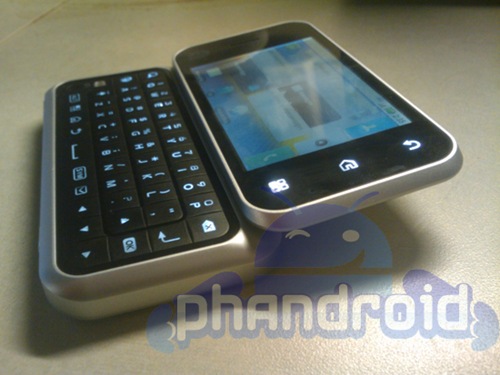 Over the last few months, we’ve been hearing a lot about an Android device code-named the Motorola Motus, which was to feature a reverse flip keyboard and a touchpad on the back (not unlike that Synaptics concept phone). Some clearer snaps have bubbled up, along with confirmation of the specs:

Motorola’s custom blur interface is on there, chock-full of home screen widgets, but one of the real shockers is that there are no Google apps preloaded on here – the search widget is even branded for Yahoo! Wow, just when we thought Google was out to rule the world, they show they’re willing to share the Android stage with direct competitors.

The Backflip (A.K.A Enzo, Motus) is apparently going to be AT&T’s first Android device, but the supported bands include 1700 Mhz, allowing the Backflip to ride on T-Mobile’s network as well. Even though It looks an awful lot like the cliq, the Backflip is definitely packing a unique style that will set it apart from Motorola’s other Android escapades.

Some poking around the calendar of Apple’s usual Worldwide Developer Conference venue, the Moscone Center, has folks guessing that the...