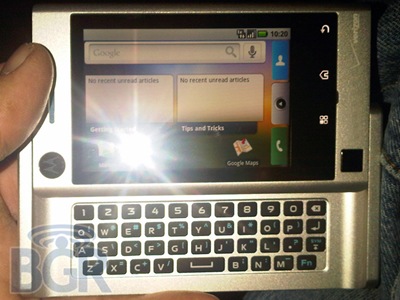 We’re expecting to see two devices from Motorola at CES this week: one is probably the Motus/Backflip, and after seeing this Devour (a.k.a. Calgary) in silver pop up, it seems a likely candidate for device number two. Running Motorola’s signature blur user interface on top of Android, packing GPS, Wi-Fi, 3G, and a 3 megapixel camera, the Devour looks like it plays second fiddle to the Milestone, but that optical trackpad is apparently great and should sufficiently differentiate it from the big brother. CES is just three days away, so we’ll find out exactly what Motorola’s got in store for us then.

HTC isn't just the design and manufacturing brains behind Google's Nexus One Android phone. The smartphone maker is also reportedly...