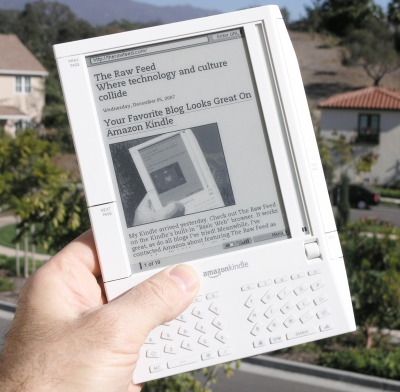 The Amazon Kindle, the Barnes & Noble Nook, what do they have in common? They both have wireless capabilities built in. It’s a feature that many wireless operators are only now starting to capitalize on. After all, what better way for operators to increase their bottom line than to partner with companies who then go and offer simple bundled connectivity to their customers? ABI Research predicts that between 2008 and 2014 the number of consumer electronics devices with mobile broadband built in will increase 55x reaching 58 million units per year in 2014. They don’t include the non consumer electronics category of devices such as environmental sensors, like Japanese operator DoCoMo is deploying, or wireless enabled power meters. It’s even been hinted that Nintendo plans to make their next mobile gaming system connected out of the box.

“When you embed a cellular or mobile broadband modem in a device, it becomes tied to a particular operator’s service billing. That changes the device vendors’ business model dramatically.” — Jeff Orr, ABI Research Senior Analyst

[Reminder: “Embedded Connectivity” was one of my 2010 predictions]

Most drivers know texting and driving is dangerous, still do it anyway

In a not too surprising, but still really disturbing announcement, cellcontrol today unveiled the results of a new study that...