AT&T kicked off CES with the announcement of five Android handsets within the first half of 2010, and we’ve got some good guesses as to what they’ll be. AT&T hasn’t touched Android with a ten-foot pole until now, and arguably, it’s high time they did. First up is the Dell Mini 3.

The Dell Mini 3 came to China in November, lacking 3G and Wi-Fi, but considering how much the press release is talking about AT&T’s absolutely magical 3G network and countless Wi-Fi hotspots, they’re probably going to be included in the US version. Aside from that, the Mini 3 packs a 3.5” capacitive touch display, 3.2 megapixel camera, and A-GPS. This one is super-duper confirmed. 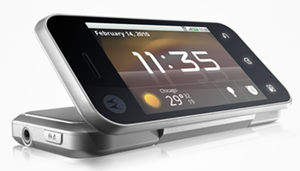 Motorola will be involved with AT&T on an Android handset, and though neither have nailed down specifics, odds are good that the recently-announced backflip will find its way to AT&T. The Zeppelin and possibly the Sholes are other handsets Motorola has been working on that may fill in AT&T’s initial Android line-up (although we’re only going to hear about one or the other at CES).

Finally, HTC will also be joining in AT&T’s Android party. There’s been rumblings that the new Nexus One would be coming to AT&T, and why not? T-Mobile and Verizon are getting all over it, why can’t Big Blue? As far as alternatives go, HTC has an extensive Android roadmap, but it’s focusing mostly on T-Mobile. In any case, there’s no official word on what or when, so we’ll have to keep our eyes peeled.

In the midst of the Android-lovin’, webOS (GSM version of the Pre Plus, maybe?) and BREW handsets were confirmed as coming down the pipe, so good stuff all around from AT&T today. We’ll be sure to follow up tomorrow on the show floor, so stick around. To be notified by e-mail of AT&T’s Android offers, hit up their new teaser site.

At the cusp of CES, RIM has announced a new accessory for BlackBerry called the Presenter. This little hub plugs...