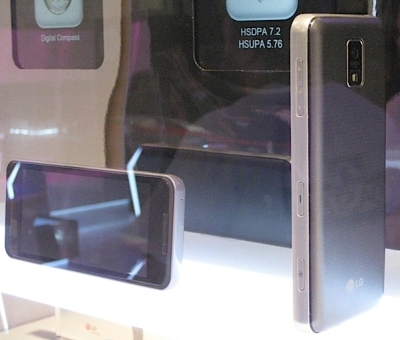 The LG GW990 is the best “tablet like” device you’ll see at CES, and it isn’t even a working prototype. With a 4.8 inch screen (1024 x 480 pixels) it is still a bit too big to put in your pocket, but it isn’t going to be as much of a pain in the ass to carry as the mythical 7 to 10 inch iSlate. What you get in such a small form factor is the first Intel Moorestown enabled device, with GPS, WiFi, HSPA and a 5 megapixel camera. No price, no availability date, though I doubt we’ll ever see it hit the market, but at least we’re getting a glimpse at where Intel is going. They hate, loathe, despise ARM with their powerful chips, low power consumption, but most of all Intel hates ARM’s business model.

Right now Intel makes CPUs and chipsets, and while there are 3rd party chipset vendors, most never really succeed thanks to Intel’s latest push to shove everything on a single die. ARM on the other hand designs processors and then licenses the blueprint. Intel is trying to transition to that model with their Atom core, but they’re not doing very well in that department. What’s Intel to do? Keep on shrinking their chips and hope that at some point during this decade one of the top 5 handset makers shoves an Intel chip inside a mobile phone. Good luck with that.

If you wonder who likes watchphones, here's a prominent example - Russian President Dmitry Medvedev, who was seen wearing the...