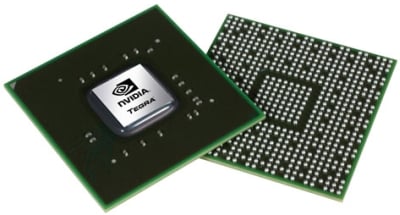 nVidia has just unveiled their brand spanking new Tegra 250 processor. It’s the first commercial Cortex A9 processor to be announced. What does that mean for you? Megahertz for megahertz the A9 should be at least twice as fast as the A8, add the fact that it’s dual core, and you’re looking at something that is quite literally faster than the Nokia N900, Google Nexus One, iPhone 3GS and HTC HD2 combined. The Tegra 250 is built on a 40 nm process ensuring awesome battery life, over 140 hours of music playback and over 16 hours of video playback, it also supports 12 megapixel cameras, can do 1080p video encoding and decoding, can handle HDMI 1.3 output, and is “twice as fast as the previous Tegra”, which doesn’t really say much since the only Tegra packing consumer electronics device I can think of is the Microsoft Zune.

Now be warned, nVidia says this processor is meant for tablets, but someone out there is going to be crazy enough to shove thing into a smartphone. Considering A8 packed devices have only been out on the market for a year now, it may take until the tail end of 2010, or even 2011, to see devices packing this much power.

Update: As always Anand Lal Shimpi does the best job on the internet at breaking down what makes this processor kick ass. Here is a teaser to hopefully convince you to check out his article: “NVIDIA skipped over Cortex A8 entirely and went to what it believes is a more power efficient, higher performing option with the A9. I’ll go deeper into the A9’s architecture shortly, but to put it bluntly – A8 is dead in my eyes, Cortex A9 is what you want.”

Update: The Tegra 250 is not the first Cortex A9 based product to be announced, that honour goes to the Texas Instruments OMAP4430 and OMAP4440. Thank you Josh Taylor in the comments below!

Jan. 7, 2010 NVIDIA today launched its Next Generation Tegra, the world’s first processor for the mobile web, specifically designed for the high-resolution needs of tablets.

“Without question, 2010 is going to be year of the tablet,” said Tim Bajarin, President, Creative Strategies, Inc. “The new NVIDIA Tegra processor has a unique feature set critical for tablets — fast web browsing with fully rendered pages, uncompromised graphics, snappy user interface and HD video – all with the battery life we’ve only seen with cell phones.”

Key to Tegra’s capabilities are eight independent processors, including the world’s first dual core CPU for mobile applications. These processors are used together or independently to optimize power usage at all times. With its ultra low-power design, Tegra delivers over 16 hours of HD video or 140 hours of music—on a single charge.

Tegra is the power behind the new generation of tablets, offering:

3D touchscreen user interfaces
Amazing battery life— always-on and always-connected
Adobe Flash Player 10.1 acceleration for streaming video and 3D mobile games
Resolution ranging from four-to-eight times that of smartphones
Form factors and screen sizes ranging from 5-15 inches
Immersive gaming, vivid photos and video, and crystal-clear audio
Next Generation Tegra is a leap in mobile computing performance with:
The world’s first dual-core ARM Cortex A9 CPU running up to 1GHz
Eight independent processors to handle web browsing, HD video encode and decode and mobile 3D gaming
10x faster than the processors used in smartphones today, and up to 4x the performance of the previous generation Tegra processor
Advanced TSMC 40nm process with active power management
Next Generation Tegra is now in production. Developers can order the Tegra Developer Kit to create applications for Tegra-powered devices such as tablets, smartbooks and smartphones at developer.nvidia.com/tegra.

At CES 2010, NVIDIA is hosting many revolutionary new tablets that leverage the power of the next generation Tegra. Visit NVIDIA’s booth in South Hall 4 #35912 to see the latest designs.

“Consumers can now get the tablet experience they’ve always dreamed of and they can leave the power cord at home. Only NVIDIA Tegra can make this happen. We’re driving tomorrow’s tablets today.”
– Michael Rayfield, General Manager of the Mobile business, NVIDIA

“We are pleased with the quality of Flash based videos, games and other rich Web based content that we see with NVIDIA’s Tegra mobile processor. Mobile devices like tablets, smartbooks, and smartphones are now able to play smooth, HD content delivering hours of stutter-free video without draining your battery.”
– David Wadhwani, vice president and general manager, Platform Business at Adobe

“ASUS’ newest tablet designs are packed with innovation, demanding sophisticated graphics processing capabilities, quick touchscreen UI performance, with very low power consumption for long battery life. The next generation NVIDIA Tegra processor has been chosen because it measures up to the stringent design requirements of our products. These products will continue to embody the innovation and forward thinking that ASUS is known for.”
– Samson Hu, Vice President at ASUS

” NVIDIA has been a great partner over the years and with Tegra they’re bringing their brand of graphics features and performance to next generation mobile devices. We’re very excited to partner with NVIDIA to demonstrate Unreal Engine 3 on Tegra here at CES.”
– Mark Rein, Vice President, Epic Games

“We are very excited by what NVIDIA is doing for mobile gaming. Tegra will open a whole new set of mobile devices for our awesome 3D technology.”
– David Helgason, Founder and CEO of Unity Technologies