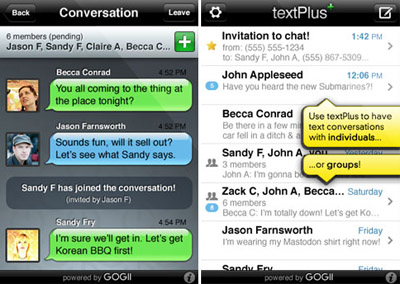 textPlus app, which was previously an “iPhone thing” only, has found its way to the Android Market, bringing ad-supported free and unlimited messaging to the platform. If you haven’t used or heard of textPlus, here are the key features:

Like that was the case with the iPhone version, textPlus is available as a free download from the Android Market, as well. And for the record, since its introduction in Apple’s AppStore, textPlus has seen almost 3.5 million downloads, and over 350 million messages sent since June 2009. Not surprisingly, the company expects similar success with the Android app.

Provider of traffic and navigation services INRIX released the "Pro" version of its INRIX Traffic! free group texting app with...