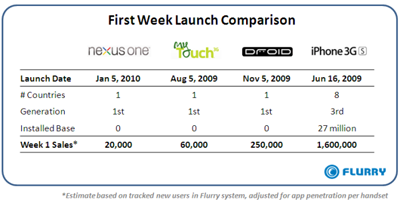 The folks over at Flurry have put together quite an interesting report on first week sales of the Nexus One. Whether you believe the numbers above or not, Flurry collects its data by monitoring usage of more than 10,000 applications on the iPhone and Android platforms. In the end, that works out to be almost 4 out of every 5 iPhone and Android handsets on the market. Not too shabby.

For the myTouch 3G, DROID and iPhone 3GS launches, Flurry detected new handsets within its system and made adjustments to account for varying levels of app penetration per handset. Additional crosschecks were also made, and I suppose the team has done the very same with the Nexus One this time around too.

Take the numbers to be what they are and draw your own conclusions… But as you can clearly see, the Nexus One was outsold by the myTouch 3G by more than 3 times, the DROID by 12 times, and the iPhone 3GS by 80 times. Krikey!

When you take a step back and look at this, the numbers may not seem as shocking. Google didn’t push out a $100 million marketing campaign *cough* DROID… They didn’t have any carrier co-marketing on-board to help push the device… and, to be quite honest, after the launch event took place a little while back, I seemed a bit underwhelmed, which, I suspect many others did as well. This my have proven to be the final ‘Buzz Killington‘.

Again, take these numbers for what they are and draw your own conclusions. In the end, I suppose I am a little surprised at how low the estimates appear to be. Would love to hear your thoughts in the comments!